Copper is on a massive bull market rally!

No one metal signifies the recovery from the March 2020 panic like copper, in our opinion. 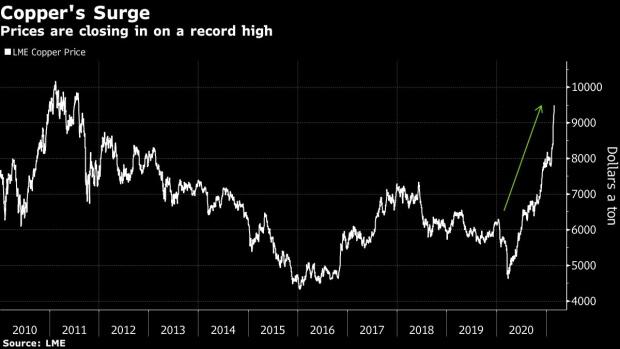 Fears over rising inflation have created incredible circumstances in the markets. A major commodities bull market began in April of 2020!

Copper’s price has already more than doubled and the fundamentals of supply and demand are looking tight.

The possibility of rising inflation, an overheated economy sentiment and a sustained supply deficit in copper have all contributed to this surge in price.

I want to take part in this, because copper is a metal that is directly-linked to the EV revolution as well!

In other words, there’s both the inflation angle and there’s the tech angle in one metal.

Government bond yields have been rising over the past two months and that’s putting pressure on the stock market, but it also introduces the topic of inflation into the lives of tens of millions of new investors, which were not even alive in the 1970s, when America faced high inflation!

FED Chair Jerome Powell has affirmed his willingness to allow the inflation rate to exceed 2%, which was once the Fed’s target inflation rate, but is now meaningless, in our opinion.

Powell refuses to acknowledge that inflation will be a problem, at this point.

Personally, I think the story here is in the fact that supply and demand are worlds apart, when it comes to copper, but in order to truly grab hold of both the industrial angle and the inflation one, I wanted a company, which focuses both on gold and on copper.

For one, between the founder, the CFO and their associates, over 50% of outstanding shares are owned by strategic investors and insiders.

the U.S. the fifth-largest leading gold producer in the world. Nevada alone accounted for

5.3% of the world’s production of gold. Total gold production recorded from Nevada from

Both of the gold properties in Nevada are historic producers. The strategy is to modernize and bring them to current standards, along with conducting drilling.

Third, there’s the copper asset, which the company just announced it acquired in Newfoundland, Canada, which is another past-producer.

65% of copper is dedicated to electrical uses. It’s used in the majority of electrical wiring because copper is the second most electrically conductive metal (aside from silver, which is much more expensive).

In addition to being relatively inexpensive, copper is malleable and easy to stretch out into very thin and flexible but strong wires. This is important because it means that copper is ideal for use in electrical infrastructure.

Another 25% of copper is dedicated to the construction industry. It’s the most commonly used material for home builders, due to its corrosion resistance, easy workability, and attractiveness – copper sheets make a beautiful roofing material and other exterior features on buildings.

The demand that is most pressing issue to its widespread use in the electrical components of modern cars. Plus, copper and brass have been the industry standard for oil coolers and radiators for many decades. In addition, the alloys that include copper are frequently used in the locomotive and aerospace industries.

Copper is an essential material component of electric vehicles because it’s used in electric motors, batteries, inverters, and wiring. It’s also needed for the charging stations – an important point since a network of five million charging ports will be needed within the next decade.

Just one electric vehicle can use 183 pounds of copper, and hybrid and electric buses can contain far more.

As the sales trajectory of electric vehicles grows, the demand for copper is anticipated to increase meaningfully.

Looking ahead, analysts expect that surging demand from the power and construction industries, along with electric vehicle and charging station applications of copper, will overwhelm the limited supply.

These growth drivers have prompted top financiers from JP Morgan to Goldman Sachs to predict a commodity supercycle.

Analysts are scrambling to hike their price targets in response. For example, Concord Resources is bracing for copper to surge above its previous record to $12,000 per metric ton in 18 months on new demand from green initiatives.

“In copper, the market is not yet pricing in the addition of potentially millions of new tonnes of copper demand over the coming decade,” observes Concord Resources CEO Mark Hansen. “We really need to see $12,000 copper to bring the market into balance.”

It will require significantly higher copper prices before there’s anything close to a balance in the market. Natalie Scott-Gray, a senior metal analyst at StoneX, forecasts that copper demand in 2021 will rise by about 5% year-over-year, while the supply will only grow by 2.3%.

Scott-Gray’s projections suggest that the global copper supply will move from a small surplus in 2020 to a potential deficit of more than 200,000 tons of copper in 2021. “We do not foresee a recovery in global supply this year, with Chinese markets more or less balancing out,” Scott-Gray added.

With this property, the company’s top priority is to issue a resource estimate called NI 43-101. Between the company’s tightly-held share structure (over 50%), the diversification between gold project in Nevada and a copper past-producer in Canada and the fact that the whole new generation of retail investors are now learning about resources for the first time (after tech dominated for over a decade), we are shareholders in Phoenix Gold Resources (TSX-V: PXA & US: PGRCF)!

As a past producer, Phoenix Gold Resources’ (TSX-V: PXA & US: PGRCF) historical copper and zinc project in Newfoundland is the company’s path to capitalize on the copper and zinc bull markets.

* Since there’s around 5x more copper in an electric vehicle than in a traditional gas vehicle, supply deficits might only be exacerbated by a steepening demand curve.

* 30 million electric vehicles are expected to be produced in 2030, so an additional 2 million tonnes of copper per year will be required by that time. This doesn’t even include the copper that will be needed for new charging ports and infrastructure, which will increase the overall demand by 12% to 15%.

In 2021, electric vehicle sales are actually poised to hit their highest level on record!

Data from research firm Edmunds shows that electric vehicle sales made up 1.9% of retail vehicle sales in the United States in 2020. This number is a quantum leap compared to prior years but it’s still small enough to allow for substantial expansion in this year and the following years.

The world’s biggest copper consumer is China. Research firm Canalys recently concluded that a record 1.3 million electric vehicles were sold in China in 2020.

Canalys forecasts that 1.9 million electric vehicles will be sold in China in 2021, signifying year-over-year growth of 51% and a 9% share of all cars sold in China for the year!

Much of China’s enormous copper usage is for goods that are shipped to other countries, as can be seen in China’s exports of refrigerators being up 45% in December from a year earlier and microwave oven exports being up 35% year-over-year.

Additionally, air conditioners, electronic products, and consumer products from October to December of 2020 accounted for just under a third of Chinese copper demand.

By 2022, it is forecasted that annual copper consumption will reach a whopping 13.65 million tonnes in China.

Citibank analyst Oliver Nugent, for instance, is bracing for the global copper market to shift into a deficit in the second half of this year, followed by further deficits in 2022 and 2023.

Meanwhile, Goldman Sachs is preparing for the global copper market to face its biggest supply deficit in a decade – 327,000 metric tonnes!

Goldman Sachs analysts have raised their 12-month target price for copper to $10,500, which would represent a record high. 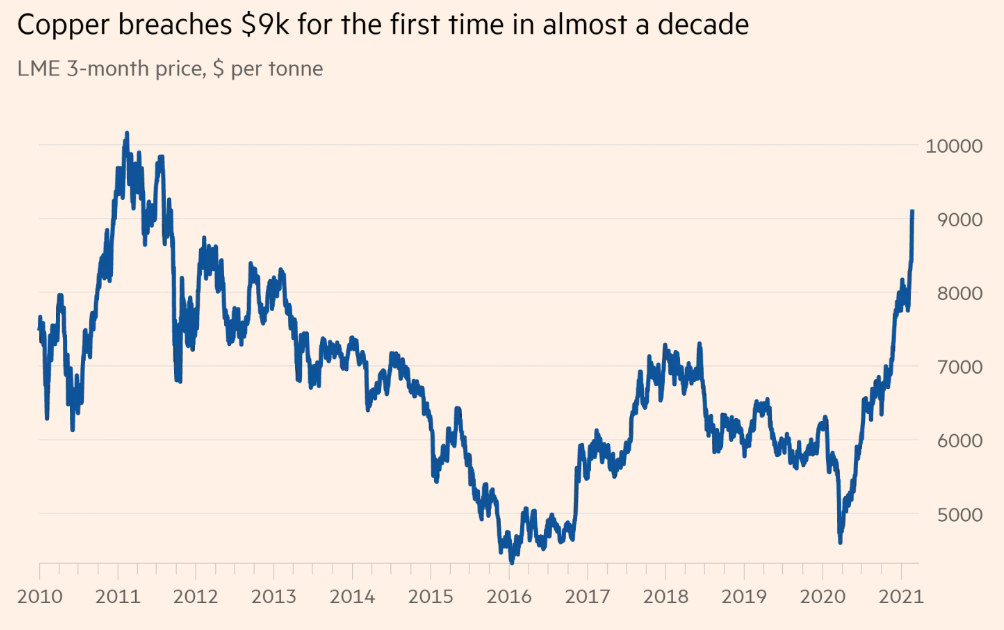 Phoenix Gold Resources (TSX-V: PXA & US: PGRCF) is developing both a gold project in Nevada and a copper/zinc past-producing mine in Canada. Wealth Research Group principals are shareholders of this CAD$10M company. Do your homework on it. Keep in mind that over 50% of the shares are tightly held by management, the founder, and associates, which means that they have skin in the game and are aligned with shareholders, as we see it.

Over his 20-year career in the mining industry, working primarily with Santa Fe Pacific Gold Corp. (now Newmont Mining) and Gold Fields, Mr. Matlack was involved in the exploration and development of several world-class gold discoveries in Nevada and California. More recently, he was interim CEO and a director of Klondex Mines Limited during its transformation from an explorer to gold producer in Nevada!